This month we are spotlighting our Preschool Director Kim Graham. She has been coaching at Gymcats since 2003, which makes her the most senior coach at Gymcats.

Kim is an amazing coach with a long list of students who love her and credit her with their success. She says she got her start in coaching at 12 years old, when, as a student, her coach would call her to sub his classes. She started coaching because she loved the sport and working with kids.

Kim has been married 27 years to her husband Mark. They have 3 boys Colton, Ashton and Jaxton. They love hiking, four wheeling, camping, traveling, watching the boys play baseball, spending time as a family, and pickle ball.

This Month we are spotlighting our girls team head coach Jenny Benning. After a late start to gymnastics, Jenny  won state in Florida when she was a level 5 gymnast. She competed to level 10 and placed second on the beam in nationals. While working toward a college scholarship she suffered a hip injury  which required surgery  and plans changed.

Jenny loves to travel. After gymnastics, Jenny was in the Air Force for 6 y ears and stationed in South Korea and Germany where she met David, her husband. She has traveled to over 15 countries.

Jenny  has a Bachelor’s degree in Psychology as well as a certificate in personal training. In the future I would like to get into a nursing program myself my goal is to eventually become a Nurse Practitioner.

Jenny is married to David who is currently in PA school at Rocky  Mountain University of Health Professions finishing a master’s program. They have a son named Levi who turns 2 in January and another boy on the way due April 15. They also have 2 dogs, Banjo (Rottweiler mix) & Daisy (Mastiff mix).

She has coached for about 2 years. She loves being back in the gym and helping the girls reach their potential!

Something cool about Jenny is that she has been scuba diving now for 18 years and loves it! She loves hiking and anything outdoors. 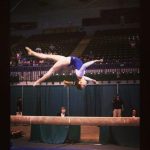 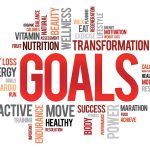 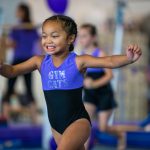